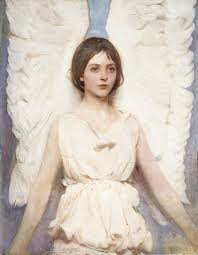 This case study in angel therapy combines the use of colour therapy and shows how the two can be combined. Before the client came I got my room ready by putting on some harp music which is very relaxing.  I also lit incense (dragons blood), and lit three tea lights just plain white ones.  When the client came I took her to the room and got her to fill in the treatment card with me.  I took all her details, name address, contact details and a brief medical history.  I asked her what she would like to get from the session.  She was happy to be guided by me.

I first offered her a glass of water.  As I have done the colour therapy course I had the coloured glasses.  I asked her what colour glass she would like to drink from.  She choose blue so I filled it up with water from my fridge and also put my magnetizer in it for a few minutes to magnetize the water.  I started the session by asking her to take some deep breaths and relax.

Use of Angel Cards

I asked her to pick three cards from my angel cards.  These were to represent the past present and future.  The card from the past was saying that she had been so busy taking care of other peoples needs that she now needed to take care of her own.  The present card was stating that as she honoured and followed the guidance of her heart prosperity would be coming to her.  The future card was stating to keep charging ahead and do not take no for an answer.  I asked her if these made sense to her.  She said that they did as she had been so busy at work and with problems and that something needed to be said to sort some of the problems out.  This tied in with her choosing the blue coloured glass to drink from.  The throat chakra and communication. I asked her if she would like to have a guided meditation or whether she would just like to sit and relax. She said she was happy for me to guide her but she would prefer the peace and quiet.  I told her about asking the angels for help with anything.  I said she needed to ask as they could not assist without her asking.  I said to her if you breath in and out and then close your eyes.  Ask the angels to come to assist you.  I said that I thought archangel Michael would be the best angel to call upon as he was associated with blue and was the angel of protection and also the archangel in charge.  I said in your head or out loud say in love and light in love and light archangel Michael please come and assist me and help me with my problems.  I said to her to sit quietly and think about being surrounded by white light coming up from the feet to the whole of your body and out of your head.  This she did whilst the harp music was playing softly.  After 10 minutes I spoke and said to her that I was wanting her to be aware of her breathing and to come back slowly into the present.  Before she did so I said to say thank you to archangel Michael for his assistance and protection.  This she did.  I asked her how she felt.  She said she felt more peaceful and knew what she had to do at work.  She needed to speak out so things could change.  She was interested in my angel altar so I said it is easy to make one.  I said it was individual how it was set up.  I suggested tea lights, incense, angel cards, picture of angels, an angel charm, aromatherapy burner, could even have a bell, note paper and pen.  I said all she needed to do was sit quietly and ask the angels to help her.  I said there were lots of angels but work with archangel Michael to start with.  I said she could also ask for other archangels to come forward even though she may not know their name.  I also told her about guardian angels and said if she meditates for long enough she may get their name.  I also suggested that she could come back for another session or get a book on angels from the library.  I said I would call her later to see how she was.  She thanked me and then went on her way.

Later in the day I called and she said she had found a white feather outside her front door and asked if this was significant.  I had forgot to tell her about the coins feathers warmth and       cool and smells to possibly know angels are around you.

I got the room ready as before but as I had used the room earlier I used some smudge sticks to clear the room from any bad energy.  After the client came I offered her a glass of water.  She choose a green glass.  I was pleased it was a different colour to the previous person although I would have had to go with blue if that was the case.  As it was green I was thinking heart chakra.  I magnetized the water as before.  I asked her what she would like from the angel session.  She wanted to know if she would find romance again.  I said that she had choosen the green glass which is associated with the heart chakra.  I said would she like a past present and future reading of angel cards.  She did so the cards she picked were for the past that the timing was right for this new venture.  The present was asking what she wanted right now and the future showed a happy move to new home or situation was in the works to bring in positive energy.  I said that the as she had the present card for what did she desire right now it maybe good to do a bit of angel magik.  I asked her to make herself comfortable and breath in and out being aware of her breathing.  I said that we were going to invite the angels to come in. I had the incense burning as well as the candles.  I said that we would ring the bell and invoke angel of the north Uriel to protect this space, angel of the east Raphael to protect this space, angel of the south Michael to protect this space and angel of the west Gabriel to protect this space.  I said we have created a sacred space for us to work in.  I said to her to sit quietly and meditate on what she really wanted.  I let her sit there for ten minutes and then I said that if she was ready we would close down the circle.  She was ready so I then rang the bell going from west thanking Gabriel, then Michael of the south, Raphael of the east and then Uriel of the north. I then said the angel circle is not broken it is now an open space, the spell is now broken by the angels grace. I asked how she felt and she said ok, but was a bit stunned by it all.  She was however interested in all that I had to say.  I did tell her to get a library book on angels if she was interested or come back to me again and I could tell her more.  I said I would call her later to see how she was.

Later I called her.  I asked her if anything had occurred and she said what did I mean.  I said well have you found any money or any feathers felt a chill, smelt a nice smell.  She said well actually I found 21 pence on my way home.  20 pence and a 1 pence piece in separate places.  I said that was the angels.  Whilst writing this up I had a call to say she found a feather on her bedroom floor.  She said it must have come from the open window.  I said it was the angels.

What I should have done was bring in archangel Chamuel for her ask this angel is good for relationships which is what the client wanted.

I have taken this course for my own benefit rather than wanting to be an angel therapist but If I was to set up I would probably do it by having three of four people coming to me for the day to learn about angels.  I could then tell them all about working with angels, how to bring them into their lives for their benefit and to make them feel better about situations.  I could tell them about colour and the relating chakras, and the angels that they relate to.  I could also get them to make a few angel cards which they can then take home, show them how to do angel magik, how to meditate, and also tell them about this course.

Luna Holistics has over 25 Holistic and alternative therapies to choose from. If you would like to learn about angels and colour therapy and study from home then these online courses are a great way to learn without any pressure. Just study in your own time at your own pace. If you would like to work as a professional practitioner then you have the option of taking an exam which will award you with an accredited qualification. 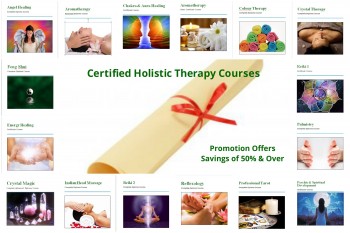