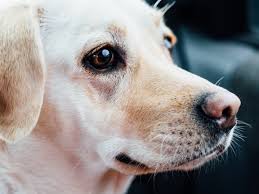 Polly is a 1 year old rescue that we have recently adopted. She exhibits fearful behavior and will regularly hide behind or underneath furniture. She has no aggressive behavior. She is not pad or doggie door trained. She refuses to relieve herself outdoors, and will not go out the door. However, she will come back in to the house using the doggie door if we put her outside. Additionally, she rarely barks or seeks out attention even though if you pick her up she relishes kisses and hugs.

Before I began each treatment session, I grounded myself. I spent time in meditation and performed a grounding technique using visualization and intention. I also wore a black tourmaline crystal pendant.

Prior to beginning our treatment session, I sat with Polly and did some deep breathing techniques. I let my mind become a blank slate so that I could more easily communicate with her. I centered myself and began to take an inventory of her body by listening to my own body and the pains and emotions I felt. I made notations that I felt a deep sadness and fear. It wasn’t a fear of physical harm, as much as a fear of loss or abandonment.

I then took a couple of deep breathes, thanked Polly and released her pain from my own body. I did this using visualization of a white light cleansing me.

For our initial treatment session I used color irradiation. Color irradiation is the method of treating a client using light. I used a table lamp and a special light bulb that has 16 changeable colors. For Polly’s session I chose a blue light. Blue calms strong emotions, such as fear. It also brings about tranquillity and promotes loyalty and reliability. Blue is also the color of the throat chakra.

Because Polly is most comfortable being held, I sat with her on the floor and she sat on my lap. While the light was shining on us, I visualised her throat chakra and mentally sent a blue healing light to it. Speaking from my heart I told her how much she is loved and that she was in her forever home. I could physically feel her relaxing into my body as she absorbed the energy.

After the color irradiation treatment I applied a drop of Rescue Remedy Pet and rubbed it in to Polly’s paws. Rescue Remedy Pet can help to ease fear, anxiety and behavioural issues associated with stress. I also applied a drop to her paws every morning before I left for work. In addition I communicated to her, through visualisation that I would be home at night. 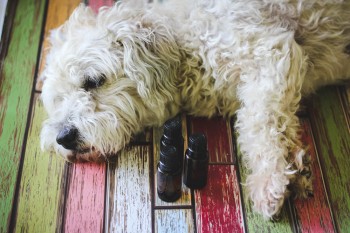 Two days later, we had our second treatment session, which utilized Reiki and aromatherapy. During the reiki session I chose to diffuse Bergamot essential oil (Citrus bergamia). I made sure that Polly could leave the room at all times if the effects began to overwhelm her. Bergamot can help a dog recover from grief and it has soothing properties. It can help to ease tension, fears and stress.

I began by opening my heart to Polly in unconditional love. She was lying next to me and I gently placed one of my hands on her back and one on her chest. This position allowed me to connect to Polly’s heart chakra and send her more love and healing. Because I felt that Polly’s throat chakra was blocked, I next moved my hands to having one on her crown and the other on her neck. While I was in this position I visualized blue light being sent to her throat chakra. After a little over 20 minutes in these two reiki positions Polly decided she was done and got up and walked away. She didn’t “hide” as was her typical behavior. Rather, she went and lay next to the front door where our other dog was. To me this was a huge improvement in her behavior. 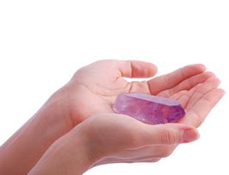 Beginning at her tail end, I held the crystal wand a couple of inches away from Polly. In small anti-clockwise movements, I slowly worked towards her head. I noticed that near her throat chakra, the energy was thicker / heavier. I made a mental note of this so I could do future treatments specific to this area.

Once I reached her head, I turned the wand in the opposite direction (rounded end facing away and the pointed end at her). I then worked my way back down her body using small clockwise movements. This allowed me to bring a fresh charge of energy back into her.

During the massage, I allowed Polly to move her position into what she felt was comfortable. She had the ability to get up and move away from me at any time during her treatment. Once I reached her head and started moving back towards her tail end, she rolled over on her back. It was apparent to me she was fully enjoying receiving the fresh charge of energy.

Since Polly sleeps in our bedroom, I also placed a large rose quartz next to our bed. The rose quartz helps to dissipate fears, engender confidence and love as well as heal the effects of past abuse.

Over the course of the next two weeks I continued to give Polly short Reiki treatments in the evenings. I also made sure that I communicated with her when I would leave the house through visualizations when I would return. I no longer feel the need to apply Rescue Remedy to her paws.

Polly now barks (a lot) and has let her guard down around us and our visitors. She is no longer fearful of losing her home and family. It is my heart’s desire to continue to work with rescue dogs and their new families to help with the transition. Just communicating to their new family member that it is their forever home can go a long way in easing their furry friends anxiety.