This is a case study of a colour therapy treatment. You will see by this just how versatile this natural therapy really is. 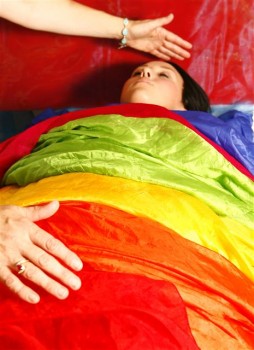 Before the client came I prepared the room, by making sure the room was clean and fully aired but not too cold or too hot.  I lit dragon blood incense to get rid of any negativity.  I had the tools that I used ready which were coloured drinking glasses. Blue, red, orange, yellow, purple and green.  I had a pack of crayons and a copy of the mandella from the course for colouring in.  I had the coloured cards that I had made in a pile, scalfs of the seven chakras in a pile, red, yellow, blue, green, purple, orange and white. A colour breathing exercise which I printed typed and printed out.  The crystals that I have which relate to the seven basic chakras.  These were amethest, clear quartz, blue lace agate, green aventure, tigers eye, carnelian and bloodstone.  I used big cushions for the client to lay on. I had soothing music playing softly in the background, Out of Africa by John Barry. 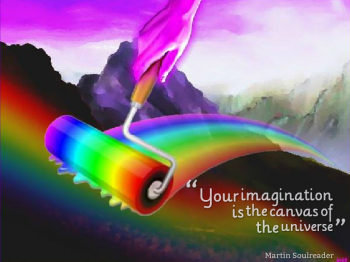 Explaining the Treatment to the Client

When the client arrived I took her to the room where the treatment was done.  I asked her to fill in a treatment card which she did.  Whilst she did that I went to the fridge and got some cold water in jug and brought it to the treatment room.  I asked her to choose a glass to drink out of and then I poured her the water.  I explained how I was going to do the colour treatment which was to get her to colour in the mandella with a choice of colours, after which I would get her to pick three colours from the pack of coloured cards I had made.  I would then do a birthday colour reading and music note association all of which this information she could take home with her in writing as I would write it on the back of the mandella she will have coloured and I would do that whilst she is relaxing with a coloured scalf around her and crystals that would be placed on her corresponding to the chakras on her body. I would get her to relax for 15 minutes and then I would see what chakras needed unblocking and the laying down treatment would be 30 minutes total. After that I would do a short colour breathing exercise and would give her the information written down to take home. I would then give guidance in the colours that she had picked and work out what areas of her life need working on to bring body mind and spirit back into balance. I said I would like feedback after the treatment.

The colured glass that was choosen was blue.  The mandella was colured in blue, red, green and purple.  The first colour from the cards picked was blue, second red and third green.  The scalf choosen was blue.  All of the crystals stayed on the body.  From the birthday and music note reading the number was 2 and the music note was D and colour was orange.  The filling in of the treatment card, choosing the coloured glass took 5 minutes.  Coluring the mandella took 10 minutes, picking and explaining the colours picked took 10 minutes.  30 minutes was with the scalf and crystals and balancing the chakras.  5 mins doing the breathing excerise and 10 – 12 mins discussing the outcome of the colours choosen.

The colour blue seemed to be most sort after during the treatment.  I asked her if she had any problems and she said she had been suffering with a sore throat.  She also said that she did sometimes find difficulty in communicating and it often left her feeling frustrated and occasionally angry.  She is mostly quite calm and gentle.  I advised her to introduce the colour yellow as it balances and is also good for communication.  I said she could introduce the colour through wearing yellow socks under trousers, or using a yellow scalf.  She could also eat yellow food such as banana or yellow peppers with salad.  I said that blue is associated with the throat chakra and as she had been suffering from a bad throat and communication problems this was probably why blue was picked so much from the drinking glass, coloured scalf and the first colour of the coloured cards which relate to what is going on at the present time.  The second colour in the cards was red which is challenges that are facing you which could be the frustration and anger about the communication issues.  The third card green indicates the energies that are coming and I said that once her sore throat has gone and also dealing with communication issues that she may have more balance of body mind and spirit and that green was the balancing colour. Also she could drink water from blue bottle or glass to help throat chakra.

I also said that blues complementary colour is red both of which she had choosen.  Greens complementary colour is purple, both of which were choosen for the colouring of the mandella.  Orange was her birthcolour which is reds bi-complementary and opposite of blue.  Orange has yellow as bi-complementary and complentary of purple. (hope I got that right).  The colour breathing exercise was to close the left nostril and breath deeply to the count of 4  and the hold breath for count of 16. close right nostril and breath out to a count of 8.  this was typed up for her so she could use it at home.  She was happy with what I had done and thought it had helped her.

Working as a professional Colour Therapist

If I was doing this for a career I would have got a proper bed for therapy work, would also wear professional top possibly pink as it is nice and bright rather than the white.  I would wear black trousers to keep me grounded.  In the treatments for colour I would need to have a price for the types of colour treatments on offer.  I could have done the coloured filter lights instead of the scalf treatment, although I do not have the coloured filter lights, could have done reflexology on her whilst she was wearing the scalf although I do not know how to do that treatment.  Massage could also have been done. Tunning forks could have been used or symbols.  There are endless possibilities as colour of foods and what types need to be consumed to bring balance.  There is also the colour of personalities spring summer autumn and winter.  I did the course for myself but if I were to set up which I am not I would probably stick to the treatment I gave.  I did do reiki many years ago and know something about crystals so would incorporate this.  The price I would think would be £25 – £30 for one hour fifteen minutes.  Follow up treatments maybe necessary as some clients would have problems that are not a one off.  Coloured cards could also be read for say £15.00 at fairs along with choosing a coloured glass of water from the chakras.  There are endless possibilities. You can also cleanse the room with smudge sticks or aromatherapy oils. As a colour therapist you could also advise people what colours are suitable for certain events. The business cards should state what type of colour therapist you are.  Price lists should be clear, insurance taken out.  Advertising by putting flyers through doors, advertising in local paper – maybe with 10%off for first visit.

To reflect on the treatment the only thing I can think of that I could have done was to put eye pads on the client using water that would have been in a blue bottle in the fridge. Blue soothes and cools.  Cotton wool pads would be wet from the blue bottled water.  I am yet to find a blue glass bottle in the shops.  A very enjoyable course which I will continue to learn from. 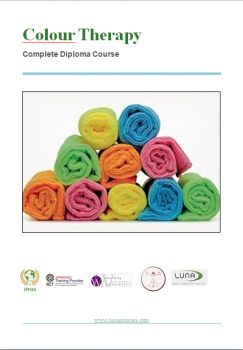