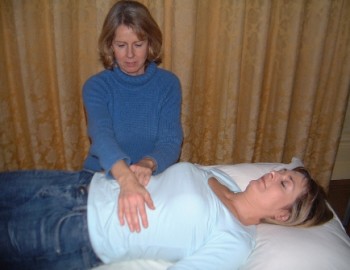 Client was in really a very sick and bad shape and in the hospital for over a month. The doctors were struggling to come up with a diagnosis that they could treat.

She’s very open to energy healing and knew that she wouldn’t get better physically if her energy was unbalanced. She was eager to have me do anything to help relieve the severity of her symptoms. DAILY VISITS: I visited Client every couple days during her stay and performed energy healing work on her. Each time she became calmer, stronger and would begin responding better to the doctor’s treatments. I’ve chosen to outline a couple of the treatments I performed which stood out the most. When I came to the hospital for Client’s first treatment she was exhausted, weak and vomiting almost nonstop. The doctors had been giving her medication to stop the nausea and vomiting, but it wasn’t working. Client’s parents were by her bedside holding her and she was crying about being exhausted and wanting to sleep, but couldn’t because she couldn’t stop vomiting.

Helping with Pain: She was in pain and so exhausted and weak she couldn’t even find the strength to vomit. I didn’t want to crowd her, so I stood on the other side of her room in sight of her to begin my treatment. I calmed myself, doing the 7 second breathing. Placing my tongue against the roof of my mouth, I did deep abdominal breathing for 7 counts on the inhale and exhale, holding it for 1 count between each inhalation and exhalation. I focused on feeling my connection with the universe and all the energies around me. I reached out with my invisible hands to feel Client’s energy field. I kept my approach very gentle since she was in such a fragile state.

Body Scanning: I scanned her energy. Her root chakra felt a bit weak, which did not surprise me given that her life was in jeopardy and everyone was scared, not sure if she would survive. There was a fiery red color radiating out from her pancreas. This told me she had a lot of inflammation. This was later confirmed by her doctors who said she had pancreatitis. Her solar plexus chakra was yellow like it should be, but it was pulsing. The energy around her stomach was sluggish and muddy, but very intense. It was no wonder she was so nauseated. There was also a dark blackish colored blockage in her energy just above her stomach which was preventing the proper flow of energy to her upper chakras. Given her present state I decided the best way to proceed would be to start with trying to calm the energy around her solar plexus chakra and stomach.

Working on the Chakras: I visualized a calming bluish white light gently filling her abdomen, calming and stilling the area. I didn’t feel comfortable opening her chakras at that time. She was so weak and fragile. I wanted to send calming, soothing, bluish white light washing over her solar plexus chakra, stomach and then over her whole body, like the gentle rolling waves of the ocean. Calming and cleansing her without being too stimulating.

She lay back calmly, taking in the energy. Once I felt her energy was more calm. I turned to her root chakra, gently focusing on building confidence, safety and security, while not stimulating her too much. I gently worked on trying to remove the energy blockage above her stomach, but working on that blockage, I slightly noticed a change in her solar plexus chakra, that it was getting a bit stimulated.

Keeping notes:  Even though there was a blockage, I decided that I would have to work on it in a later session. I again washed over her energy field with calming, soothing energy. As I did Client fell asleep. She was finally calm and peaceful enough to be able to get some much needed rest. I continued to gently balance her energy removing more and more harmful energy as it became visible to me and as she grew strong enough for me to do more intense energy work. I continued to jot down notes in her client treatment card with each treatment I did.

Follow up: A few weeks later Client was doing a bit better. The doctors were expecting that she would be in the hospital for another several days, or more than likely another week. I came in to do another energy healing on her. It seemed to work better with her doing hand off healing. I stood on the other side of her room within sight of her bed. This way her family could be by her bedside and I wouldn’t be in the way. Client was used to me doing energy work on her and settled right down, often falling asleep. She trusted me to work on her and said she felt so much better afterwards. Even her family noticed a difference and didn’t want to do anything to get in my way.

Continued Treatment: This evening it was just Client, my mother (a good friend of Client’s) and myself. She fell asleep and I went to work. After initially feeling her energy field, I felt she would be able to handle a stronger healing session. I did an initial scan and felt she had quite a bit of harmful energy built up throughout her energy field, especially around her solar plexus chakra, pancreas and liver. I used my imaginary hands to feel any blocked or congested energy and used a counter clockwise motion to unwind the harmful energy so I could remove it. I visualized a cleansing violet flame burning away harmful energy. I got a good response, but I felt she needed more and was strong enough at that time to handle it. I told my mom to stand guard in the room and make sure I was not disturbed by anyone, because once I started the treatment I needed to finish it and not be interrupted.

Opening the Chakras:  It was late at night, so I wasn’t expecting interruptions anyway. My mom agreed though to stand watch, while I went to work. I called in for my spirit guides to guide and protect us. I focused on deep abdominal breath and made sure I was grounded and secure in my own energy before proceeding.

I opened each of Client’s chakras one by one starting with her root chakra and working my way up to her crown chakra. Once her chakras were open I worked to separate the harmful foreign energy in her energy field from the healthy energy which belonged, by focusing on the differences in the frequencies of the different energies in her body and aura.

Tapping into energies: I visualized a violet flame burning through her energy field, seeing the harmful energies being lifted like a black smoke rising above her body. Focusing on the frequency of the harmful energy, I opened an inter-dimensional gateway. By tapping into energies and reaching out beyond our 3 dimensional world, I was able to feel a dimensional plane with energy in a similar low frequency to the energy being drawn out of Client. Once the gateway was open, I made sure to keep it stabilized and not let it grow. Inter-dimensional gateways need to be controlled. Once opened they continue to open wider and can get out of control if you are not careful. I kept the gateway small enough to be useful to me. I made sure to keep the energy flow in one direction, so that I could send energy through, without anything or anyone coming through into our dimension. I visualized the harmful energy flowing from Client, drifting through the gateway. I made sure to keep a feel on her energy the whole time making sure there were no instabilities. She felt calm and stable. I drained the harmful energy from her energy field until I felt that I had drained as much as was possible at that time.

Once I felt the flow of energy slow and trickle off to a gradual stop, I halted the drain. I closed the gateway and made sure it was properly sealed so it couldn’t open again. Then turned my full attention back to Client. Now that her energy field was depleted of a large amount of harmful energy I needed replenish it.

Violet Flame: I again sent a violet flame to cleanse and remove any residual harmful energy debris. After I felt the residue was successfully burned away, I let the flame gently fade. I drew in a healing white light from the universe and visualized it filling, healing and balancing her energy field. The energy was drawn in rapidly in the beginning and then I felt she didn’t need more, that all the depleted energy had been replenished. I worked with each chakra one at a time starting with her crown chakra and working down to her root chakra, to balance and stabilize the energy.

Spinning Chakras: I made sure each chakra was spinning steadily, not too fast (I didn’t want her over stimulating), and I made sure each chakra was spinning in sink with the others. Once everything felt balanced, I closed each chakra, starting at the crown and working my way down to her root chakra making sure she was properly grounded. Smoothing out her energy field with my invisible hands, I left her to rest and washed any energy residue from my hands, grounding and making sure my own energy was balanced. The room felt peaceful and Client was still peacefully sleeping. She only briefly roused once during my healing, but closed her eyes and went back to sleep. I took note of the healing in her client treatment card after the session.

Conclusion and Follow up: We got a phone call from Client the following day. She was feeling much better.

Her doctors were so impressed with how much better she was doing, they decided to send her home that day instead of waiting another several days or a week like they were planning prior to the energy healing session. Client steadily made more and more progress. She’s energetic, perky and acting like her old self. She said she could feel each time I was doing energy work and that she felt so calm, balanced and that her symptoms felt much reduced with each treatment. She has since asked my advice any time she doesn’t feel right and has said she trusts my judgment better than her doctors at time. She of course listens to her doctors, but if she ever feels weird about what they tell her she asks me for my input.

Aftercare: I told her to make sure she takes care of herself and that she doesn’t continue to put everyone else’s needs above her own. She agreed to take it easy and let me know if she needed further assistance.

If you would like to learn to work with energy and would like to take our Energy Healing Diploma course then this easy to follow and indepth course can be downloaded immediately or purchased as part of our Holistic Career Packages options.