This is an Energy healing Case Study from one of our students  – Client has an extremely stressful job as a nurse in an Accident and Emergency ward in a hospital.

She confided to me that although she had to remain calm on the exterior whilst she was on duty, she witnessed many distressing things on a daily basis, which were affecting her inner peace.  I suggested that an energy healing, integrated with some light healing and crystal and colour therapy, would help her to release the suppressed negative energy that was accumulating inside her as a result of her stressful occupation.

I made her comfortable on the healing table, placing a warm blanket over her.  I lit some pink candles and an oil burner containing lavender oil, to aid relaxation.  I also, placed a soothing cd on to further encourage her to relax.

To help me to attune myself to Client’s energy field, I began my personal preparations. I began with the seven second breath exercise.  Putting my tongue against my palate, inhaling for 7 counts, retaining for one count, then exhaling for 7 counts.  I then proceeded to raise the energy, using the ‘imaginary hands’ technique in order to raise the energy up from my base chakra through to my crown chakra and also stimulated my chakras using the ‘tearing bread’ technique, and then closing them once again by imagining imaginary hands enfolding each chakra and then sending the energy back down from my crown chakra to my base chakra.

To help find out the present condition of Client’s energy system, I began to read her aura field and noticed that parts of it were dull and muddy. To further determine the condition of Client’s energy system, I held my hands a few inches away from her body and passed them over her from her crown to her base chakra.  As I made the pass, I sensed a weakness in both her heart and solar plexus chakras, which had shown up in her aura as dull and muddy. I then commenced the hands on treatment.  Starting at the top of her head, I placed my hands over her eyes, but not touching them, tuning into the energy flow from my crown chakra into my hands. This is a particularly soothing position for any stress that the patient’s body is harbouring and Client let out a contented sigh as I did this.  I carried on down through her body – on her temples and over her third eye and Client smiled once again,  this continued through her back brain, as I cupped her head in my hands she smiled and said ‘this is lovely’.  I carried on down through her chakras, speaking in soft tones, telling her about the colours that related to each of her chakras and asking her to visualise the colour relating to that particular chakra. Whilst I was doing this, I was looking, in my mind’s eye, at the colour that I could ‘see’ on the back of my right hand.  On Client’s heart and solar plexus chakras, I noticed that the colours were weak and a little discoloured, which confirmed my earlier suspicions when looking at her aura. I spent some extra time on these chakras by imagining a cloud of  bluish-white light beneath my hands and directing this cloud of energy down into her heart chakra and then repeated this extra burst of healing energy on her solar plexus chakra.  When I was satisfied that they had been returned to their optimum condition and were rebalanced and spinning strongly again, I  completed the front body treatment and asked Client to turn over, which she did happily with the smile still on her face.  I then placed my hands on her shoulders and was at once aware of the tightness there.  I imagined another cloud of light emanating from my hands and going into the muscles and tissues of Client’s shoulders, which seemed to help ease the tension she was holding there.  I carried on down her back and when I reached her kidneys and lower back, she let out a cry with a shudder and shed a few tears, which she apologised for.  I reassured her that this was nothing to worry about, and that it was a good sign and that she was releasing pent up stress from deep within.  After the completion of the hands on treatment, I finished the session by closing her chakras from the crown down to her base chakra.  I then used the sweeping method through Client’s aura, to permanently get rid of any negativity which may have been remaining.

I then softly encouraged Client to open her eyes and to gently sit up, in her own time.  She seemed very pleased with the treatment and said that she felt that ‘a weight inside her seemed to have been taken away.  She said that she would continue with the energy healing on a regular basis in order to prevent her stress levels from building up inside her once again.  I completed her client record card,  noting the effects of the treatment, together with the client’s feedback, for future reference. 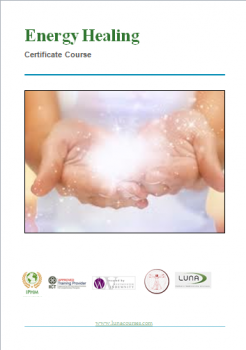