When Client arrived for her appointment, I completed a short health and lifestyle questionnaire with her. It was established that she had no underlying health conditions, allergies etc. I confirmed Client understood that any advice I gave her was not intended as a substitute for medical advice from her GP and that if she had any health concerns then these should always be discussed with her GP as should any proposed changes to her regular diet. This was included as a clause on the questionnaire which I asked her to sign.

We began the appointment by looking over her 3-day diet and exercise record and discussing her regular eating patterns and some of her questionnaire responses.

It was noted that she led a very active lifestyle with a full-time job that is very physical, and her lifestyle outside work also extremely active involving trips to the gym several times a week, running, daily cycles on her commute to work and participation in a rugby team training twice a week and often a game once a week too.

We established that her main concern was that although she considers that she does not overeat and exercises plenty, she can’t seem to get rid of excess fat on her body, particularly around her middle. It was clear from her 3-day record that her food intake was not nearly sufficient considering her active lifestyle. It was also apparent that the types of food choices she was making weren’t adequate for good health and certainly not for someone who expends the amount of energy she does on a day-today basis. She routinely skipped breakfast followed by a 5-mile cycle to work and nothing to eat until sometimes midday. Her diet comprised mainly of 2 small “meals” each day, mainly refined white carbohydrates and foods with high saturated fat content, with the odd bit of processed meat, and definitely lacking in fruit and vegetables. This deficient diet included prolonged periods without food and was supplemented with high-sugar energy drinks to counteract the energy slump and fatigue she was feeling most of the time.  (learn more about  health and nutrition)

Client admitted that she knew very little about nutrition and the kind of diet she should be following for good health. She was confused that she was eating so little, yet still not managing to get rid of the fat round her middle.

I decided that I would use a simple visual tool to illustrate to her a recommended balanced diet such as those shown on food “pyramids” or “healthy eating plates” etc. As she had indicated she knew very little about nutrition, I wanted to make this as simple as I could so that she did not feel intimidated and put-off the idea of healthy eating.

I drew out a similar pie chart – a “plate” – illustrating the different food types, and showing the balance of each of these groups that she should be eating on a daily basis. With her help, I listed some examples of each which were foods she knew and liked. I pointed out that it was recommended to eat at least 5 portions of fruit and veg a day and to limit foods high in sugar, salt, saturated fats and “white” refined carbs that would cause a spike in her blood sugar.

I discussed with her the importance of each of the food groups and the roles each of these played. I explained to her the role of slow-release (Low G.I) carbohydrates and the importance of eating regularly and not skipping meals, particularly with reference to her specific concern about the fat round her middle, and that maintaining an adequate and steady fuel supply to her body was important to prevent blood sugar spikes and regulate her metabolism.

Using the visual tool as a guide, together we looked over her 3-day record and compared it with this chart, and agreed that her diet was lacking. She asked me to draw up an example daily eating plan for her to follow.

Drawing up a plan

I drew up a rough plan which included eating regularly and included options for each meal. The plan also included healthy snacks between meals to maintain her metabolism and blood sugar, to prevent hunger and most importantly so that she was fuelling her body for all the physical activity she was doing. The main changes I recommended as part of this plan were that she have a substantial breakfast comprising of lean protein such as an egg and slow-release carbohydrates such as a bowl of porridge, and that she try to aim for at least 5 portions of fruit and veg each day. I also advised that she replace the sugary caffeine-filled energy drinks with plain water and reminded her to drink water when exercising. I also suggested she might want to take a multivitamin & mineral supplement for the first few weeks, not as a replacement for good diet but just to give her body a little boost and help her on her way.

We agreed that she would speak with her doctor before implementing some of my suggestions over the next few weeks, contacting me if she had any questions, and that we would meet again in 3 weeks to discuss how she got on and to answer any further questions she might have.

Working as a Health Practitioner

If you would like to train and work in this field then our distance learning course is an ideal place to start. You will also receive an accredited diploma on completion that will also ensure you are eligible for insurance to work as a professional practitioner. 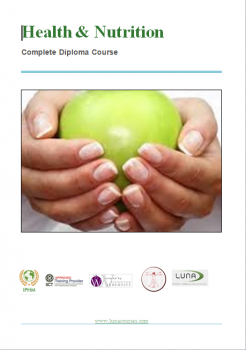