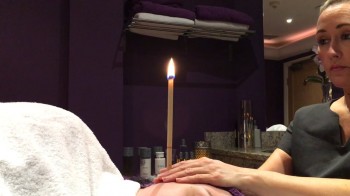 The session began with a medical history intake which I assured Client was completely confidential.  I also told him that it is important to have this information to make sure that ear candling was safe for him and he didn’t have any contra-indications for having this treatment done.

He completed the questionnaire and the only implant he has is a dental implant.  He stated a stress level of a 2, which I consider a moderate stress level.  He expressed that he would like to have a reduction in wax build up, better hearing, relief of sinus pressure and relaxation as the effects from the treatment. Therefore, the Reason for Treatment is a reduction of ear wax, relief of sinus pressure, and stress reduction.

He does not have any allergies to essential oils nor any oil that he does not like the smell of.

I explained that the Hopi ear candling has been used to clear ears for thousands of years by the native Indians of both North and South America. I also explained that earwax is made by the body to clean unwanted materials from the ear canal and protects as well as lubricates the inner ear.  It can build up in the ear canal causing problems with hearing and pressure.  It is not recommended to use a Q-tip in the ear canal to clean the wax build up.  That may push the wax further into the canal.  I told Client that the ear candling would help reduce the inflammation of the membranes of his nose and throat from inhaling dust and pollen, which he does daily from working outside at times inspecting new construction sites.  Additionally, he wears a phone earpiece daily, which sometimes gives him the feeling of pressure in his ear. I told him that the ear candling will help to equalize the ear pressure.

I explained that the treatment would take approximately one hour.  I also told Client that the candle is made of hemp and cotton flax and it is hollow to create the chimney effect, which draws the wax from the ear and helps equalize ear drum pressure. The heat sensation that he will feel stimulates the circulation of the blood and lymphatic system which is the main defensive system of the body removing waste products from the blood, helping the immune system.  I informed Client that we would begin by him lying on his side on the massage table and would treat one ear then the other.  I would do some lymph drainage massage after the treatment to assist the lymph to drain, as I am also a licensed Massage Therapist in Pennsylvania.

I used a standard unscented ear candle for his treatment.  I marked both candles with a line for ending and the ear that I used it on.  I played a CD of relaxing music that I use for massage. I had my table at the head of the massage table with the bowl of water, candle, scissor and lighter.

Client proceeded to lie down on the table for treatment to begin in the right ear.  I placed a pillow under his head and one between his legs for comfort.  I also placed a warmed herbal pack around his neck and shoulder.  He stated that he was very comfortable, felt very relaxed and the heat from the herbal pack felt good.  I covered his head with a towel that has the ear cut out, and fitted that over his right ear.  I placed the candle in his ear and lit it with the lighter.  After a few seconds, I noticed that there was smoke in and around his ear.  I adjusted the position of the candle and the smoke disappeared.  I asked if he heard any noise and he said that he heard some crackling noise; I told him that was expected.  He also stated that he felt warmth in his ear, which I assured him that was normal as well.  I gently massaged around the ear and the ear lobe at times during the treatment.  The candle burned to the mark that I made, which was 2/3 of the way down the candle, and I removed it and extinguished it in the bowl of water.

Client turned over for treatment to the other ear, I positioned the pillow between his legs, the herbal pack and towel around his left ear.  I placed the candle in the left ear and lit it.  This time I had it correctly positioned in the ear, so there was no smoke in the ear.  After the candle burned to the correct spot, I removed it and extinguished it again in the bowl of water.  I removed the herbal pack, and had Client turn onto his back.  I positioned the pillow under his knees, removed the pillow from under his head and did a few minutes of lymph drainage massage on his neck and face.  He relaxed for a few minutes on the massage table.  After he got up, I gave him a glass of filtered water and I cut the candles and we looked at them.  We looked at the wax on the inside of the candle, which was a small amount. 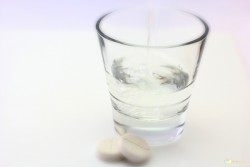 We then discussed the treatment.  He stated that his hearing felt sharper and brighter.  He said that his ears felt clearer and he felt a reduction in the sinus pressure.  He also felt very relaxed.  I asked if he fell asleep during the candling as I heard him breathing very calmly as if asleep, and he stated that he fell asleep a few times.  When I asked if we achieved what he said he would like to achieve prior to the treatment and he said that we did; better hearing, sinus pressure relief and relaxation.  For home care, I recommended drinking at least 8 glasses per day, and do not insert Q-tips into the ear canal for wax removal.  Q-tip are to be used to clean the outside of the ear only.  I recommended monthly ear candling to continue with a maintenance program.

I learned that I did not position the candle properly in the right ear at the start of the treatment because of the smoke, but I was able to adjust the position and get the desired result.  I felt that the rest of the treatment went well.  Since I am a licensed Massage Therapist, I was secure in positioning and the massage of the client.  Client said that he felt that I was confident giving him the treatment and he did not feel any insecurity during it.  I also learned that I was not pleased with the type of candle that I used and will be ordering some different ones to find the ones that I prefer.  I have colleagues that use ear candles and have gotten the information from them to try the ones they use.  I also plan on purchasing some from your website.  Overall, I was pleased with the way the treatment went and the feedback from Client.  I feel that my massage background is an asset to my skills and confidence in providing this treatment to my clients.