Love, Emotions and the Human Aura 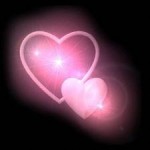 In part 5 we looked at childrens auras and how food affects our aura, in this part we are looking at how love and our emotions affect our aura.

When we develop a broad-mindedness and generosity, the red element in our aura becomes changed to rose pink. If the person is of a religious nature it changes to blue. The mind aura becomes expanded when we use it to think of other peoples needs, and colored with blue in the amount of love with which we so concern ourselves. The colour of earthly love is red, being rooted in the sex nature (root chakra is red) and the aura of sensual man or woman is flooded by warm tones of crimson, scarlet and  blue. The blue isof a deep rather dirty shade, which at times appears almost purple when mixed with the red. Such a person shows very little intellectual light, because all the powers are focused in the center of emotion. They feel, rather than think, and their life is ruled not be reason, but by desire. Sometimes, however such people conceive strong attachments for their children, or some circumstance arises in which they are forced to curb the desire nature and love more unselfishly. It is then interesting to notice the gradual shifting of the focus of vibration from the region of the sex organs to the centre of the heart, with a corresponding refinement in colouring. Intense shades of harsh reds change to soft rose and finally to glorious blue. 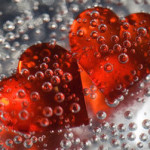 higher center, such as the heart, may in time transform them. For upon our capacity to love depends our own spiritual advancement. We might say, too, that upon our capacity to love depends the salvation of all humankind, for it is the law that real love must of necessity draw a response from the persons loved, and they in turn will love, becoming also miniature savours of humankind. 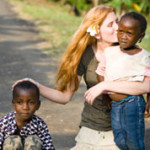 People whom have a capacity for such love are really the saints of our world. The saints who dwell in slum apartments; cottages with small backyards, enormous families with children, some of which  may have been adopted from even less fortunate circumstances. The saints who spend their lives scrubbing, cooking, praying, nursing the infant or the aged; loving everybody indiscriminately, what of them? – If you could catch just one glimpse of such an aura, in which all the colour seem to vibrate from the centre of the heart. The red of the passions has been lifted up and changed to flashing shades of azure and sapphire, which interpenetrate what is left of the passional nature, so that it appears mauve, and the colour of the intellect, which plans and thinks for others, is charged with these same shades of blue, so that it appears sometimes as blue, sometimes as lemon. The glory off such coloring,s when perceived in surroundings bereft of beauty and surrounding a persons Aura who may be utterly illiterate, makes one feel very humble. 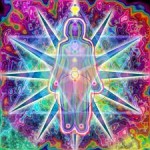 Needless to say, every aura differs from another, for one man will love more than another who thinks, and he who thinks may at times love very greatly. It is auras such as these that may eventually expand into thee glorious mother-of-pearl of the illumined mahatma, saint or teacher, who will leave such a mark on the history of the world that even sands of time will have difficulty in effacing it.  With such souls a mysterious moment is attained in which another centre, situated in the top of the head, becomes active and its radiation touches the faint, silvery shell of the causal body, which immediately penetrates the ordinary aura, flooding it with silvery radiance, so that the colours there become luminous with new light and new beauty.  The saint then becomes not a saint of this world, but a saint of the heavenly world and his or her work, thenceforth, is a work supernal. Hi or her sojourn in this world is a sojourn of outstanding beauty. It is the attainment not only of a purified consciousness, but of a super-consciousness, and such a person remains for ever a super-man or a super-woman.

In part 7 we will learn about disease and the human aura, in the meantime if you would like to learn more about auras and chakras and how using your knowledge can help to heal both emotional, spiritual and physical problems then enroll in the Chakra & Aura Home Study Healing Course.