In part 8 we discussed metaphysical healing which has been shown to yield some amazing results. In this part we are going to discuss the Psychic Phenomena and how this affects the aura.

So how does psychic phenomena affect the aura? How does the aura affect psychic phenomena. If these questions could be finally and scientifically answered, psychic phenomena could be produced almost at will.  Unfortunately the exact answer remains unknown.  We know for instance, that darkness is essential for the production of a good materialization; that light waves have a destructive effect upon the substance known as ectoplasm; that a state of harmony between the medium and the sitter is essential to the production of all good phenomena; we know that a medium is essential and that really good mediums are very rare. We do not know in what degree the aura contributes to the power which is felt in a good seances and, for some unknown reasons, is entirely lacking in others. Although the writer does not claim to express an opinion on this matter, nor in any way to lay claim to being an authority upon it. There are, however, one or two things which she has been able to gather from careful observations, and which are now presented in the hope that they may be of value to other people who have not had the same opportunities. 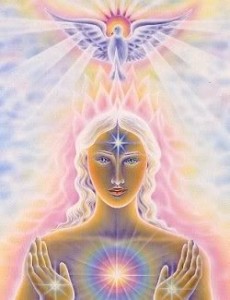 It would appear that all psychic phenomena depend to a great degree upon the sensitivity of the aura, or upon the power of the individual person  to response to the intangible world of vibratory forces such as though, music, natural beauty and the supernatural worlds which interpenetrate this world. People who are sensitive, people of artistic temperament; the generous-hearted, loving type of person, all are open to the super-sensual world,  but the persona whose whole interest is turned inward to himself, the miser, the man or woman who imagines an insult in every word uttered by other people, such people are unlikely to receive outstanding personal psychical manifestations for the simple reason that the aura is too insensitive to convey the vibrations to the physical brain.  When a discarnate soul- a mother, for instance, drawn by her intense love to a son or daughter – desires to make herself known, she has either to impinge her influence on to the aura or she has to pass through it in order to touch or otherwise make her presence known to her child. This passing through the aura is no easy matter. We must remember that she is functioning in a body composed mainly of matter similar to that of the aura, and therefore for her to pass through it would be analogous to any one of us trying to pass through the physical body of another.  It just cannot be done. In an instance such as that of the mother and child, the love link would enable the mother to overcome the difficulty and she would be able to impress an image of herself so strongly on the aura that her child would become aware of her presence.

In part 10 (coming soon) we look into more depth about mediums and the supernatural world.