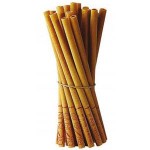 Hopi ear candling is an ancient treatment that has been used for thousands of years and today continues to be widely used by practitioners to treat a range of issues. On the surface of it, Hopi ear candles regulate ear pressure and loosen and remove excess wax from the ear canal, yet by doing so, they are able to effectively treat a number of conditions such as headaches / migraines, sinusitis, tinnitus and allergic rhinitis.

The candling treatment helps to rebalance the pressure in and around the eardrum, soothing and calming many symptoms. The process of Hopi candling involves a specially designed hollow candle being inserted just inside the ear canal. The candle is then lit and the suction that is formed draws the impurities from within the ear. This process is known as ‘the chimney effect’. The rising air gives the ear drum a gentle massage and also helps to regulate ear pressure. A small amount of ear wax may also be removed during the treatment.

The earliest recordings of candles being used to clear the ears date back many thousands of years to the native Indians of North and South America. Through ancient cave drawings historians can accurately identify the use of ear candles being used by these native tribes. From the drawings, it can be concluded that the ear candles were used during initiation rituals and also as a medicinal tool.

The actual word ‘Hopi’ comes from the name given to people from tribes in North America. The Hopi Village is thought to be the oldest continually occupied settlement in America, dating back to the year 1100. Biosun, one of the major manufacturers for Hopi Ear Candles, promotes the concept that the use of candles can be directly traced to the Hopi people and to the village itself.

Most people think of earwax as being of little or no use and function to the human body, when we feel that there is an excess, the first step is to try to remove it, often in a potentially damaging way by inserting a cotton bud! The truth is that earwax does have its uses and serves a purpose. Earwax is made by glands in the ear canal and consists of skin cells and hair, the wax works as a cleaning agent excreting unwanted materials from inside the ear and it also protects and lubricates the inner ear.

The outer ear contains around 4000 glands specifically to produce earwax. During normal functioning, the ear canal will be able to clean itself by excreting the wax out towards the opening of the ear, where it falls out or is removed when washing. While earwax does have an important role to play, it can also cause problems when built up in excess.

In America alone, some 12 million people go to their doctor with issues surrounding excess or built up earwax, such as pain and itching in the ear, tinnitus (ringing sounds) and loss of hearing. Trying to remove excess earwax by using cotton buds can have the opposite effect as it frequently pushes the wax further into the ear and packs it tighter inside.