Mystery of the Human Aura Part 4 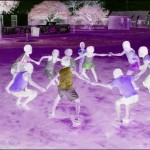 In part 3 we discussed how childrens auras develop from  birth. To now return to the causal body this is the only aura to be perceived around the young infant. During the first months of life it appears to glow and palpitate with vibrations of extraordinary rapidity.

From observations, one concludes that the whole purpose of the life of the infant is to attract all available material for the building of a sound body. During the frequent periods of sleep a terrific work of construction appears to go forward in this aura. It is true to say that the fist months of life can make or mar the well-being of a person for ever, and we may well conclude that in the case of an infant whose digestive processes are marred by improper food or care, resulting in interruptions of the sleep periods, this building of the causal body will be interrupted. The other processes which are dependent upon it will, in course of time be less perfect.

After the first year another change begins to be seen in the aura. A faint, rosy tinge is perceived in the midst of the blue vibration; a tinge which appears to emanate from the region of the solar plexus. This vibration very slowly spreads and intensifies in colour until about the age of five, when another change can also be observed. The writer Usula Roberts who wrote for the spiritualist churches and expert in auras and their formation believed this to be the colour of the natural instincts and appetites, since i can be seen to intensify to a deep red when the child is provoked to anger, and dying to the original pink when the interest is diverted. Possibly it is created by the different substance’s extracted from the food on which the child is fed. We all know that certain foods , by creating digestive difficulties, can also upset the nervous system. We may conclude that the introduction of high protein-valued foods create a different nervous radiation which is shown aurically in this manner.

One must conclude that the red radiation is of nervous and emotional origin since it is situated in the region of the solar plexus. It is well known that all emotions affect the nervous system which radiates from the plexus centre in the same way that railway lines may radiate across the country from a certain terminus. It is also known that people who live upon a diet composed largely of animal food have proverbially unstable nervous systems in which animal passions such as lust, greed, anger etc, are apt to overpower the reasoning faculties. We must conclude that the constituents in animal foods supply to the human organism a high rate of nervous energy which is thrown off in this manner. It has been observed in the case of vegetarians that the plexus radiation is of a soft pink shade, in contrast to that of the flesh eater, who betrays a red which differs in the degree of murkiness according to the amount of the food consumed.The radiation also differs in its colouring according to the temperament of the individual. Thus a calm, self controlled person radiates a soft and gentle red, while the hasty tempered and lustful temperament betrays shades of crimson or scarlet.

Again we must return to the topic of food. It has been frequently proved that a change in diet results in a change of temper; much ill temper is known to be seated in digestive disturbances, through diets which supply too much protein to the system, causing blood pressure and choleric outbursts. In the case of children, this radiation appears as a normal stage in their development; it is undoubtedly rooted in some dietary change, but it is indicative of natural instincts such as hunger, adventure, anger, curiosity, affection, etc., without the experience of which it would not, as it does, evolve the intellectual, thinking self.

The sensitive child is invariably the child who is not very strong physically and in the sensitive, nervous child both the blue and the pink radiations are far more subtle than in the case of the robust child, whose explosive interest in all things, and whose practically inexhaustible energy, betrays the depth of the blue and red colourings. Again I return to the food question and point out that the delicate child is naturally fed with finer, milkier and more easily digested food in consequence of which the nervous radiations would differ in the materials from which they originated.

In later years when the adult begins the spiritual quest, it is the sensitive individual who easily subdues the animal nature and cleanses the consciousness of earthly desires preparatory to illumination, while the passionate man or woman struggles long and hard to control the elements which have been built into their make-up during childhood.

Development of Aura between the ages of 9 – 18 months 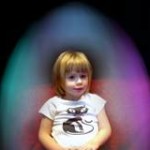 From the ninth month to the eighteenth month a gradual change can be noticed in the aura. The bubble-like sheath becomes gradually filled with a beautiful blue vibration which seems to emanate from the pres of the skin of the young child and surround him in a moving cloud of cloudy matter. This blue radiation is entirely an individual creation, and varies according to the temperament of the child.  In the case of a weakly child the blue is of a fainter colour than that of a child whose intense activity and intelligence result in a deep shade of glorious colour. The ailments and constitutional weakness of the young children can be discovered in this blue field as patches of grayish colouring, imposed upon the blue in the are of the ailment. Thus, a cold or cough would betray a grey patch in the area of the lungs, and in the region of the head if the sinus, ears or eyes were affected. In the region of the stomach the aura discloses digestive disorders and so forth. This blue aura we have come to call the health aura, through sometimes it is called the etheric sheath. It remains with the individual from the time of childhood to the time of death, and upon it are imposed the health and disease reactions of the whole lifetime. Upon its blueness or grayness depend the general well-being of the grown individual.  It is a certain indication of the general health, and its symptoms should never be ignored.  A disability may well show itself in this aura before manifesting in the physical body as actual disease.

In part 5 we will learn about the Dawn of Intellect

You may also learn more about auras with our chakra and aura healing course and Energy Healing certificate course.