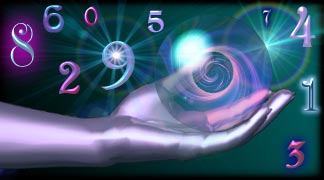 Numerology is a branch of the occult which attaches meanings to numbers. According to the principles of numerology, it is possible to learn a great deal about a person by calculating the numbers involved with his or her name and birthdate. Numerology is also used to analyze texts, messages in dreams, and so forth, and it is an immensely popular branch of the mystical arts; many bookstores, for example, carry a wealth of numerology texts to cater to the demand.

Humans have probably been using numerology since the concept of numbers arose, as some numbers have mystical connections which are extremely ancient, such as the number 3, which is associated with balance and stability in numerous cultures. The Ancient Greeks and Romans both dabbled in numerology, using numerology to tell fortunes and to determine auspicious times for various activities, and some cultures continue to do this; in China, for example, people can pick up numerology booklets which they use to tell their fortunes throughout the year.

In numerology, every letter has a numerological association; in the Hebrew, the linking of numbers to specific letters is known as gematria. The tradition of associating numerical values to letters is quite old; Pythagoras, for example, believed that everything could be represented with numbers, and he dabbled in numerology quite a bit himself, which comes as a surprise to some modern mathematicians. Numerical values for letters vary, depending on the numerological tradition which someone follows; many people simply count the letters in their alphabets, adding digits together to get a single number to represent a letter when they reach double digits.
Some people consider numerology to be a forefather of mathematics, making it analogous to astrology and the study of astronomy, or alchemy, and chemistry, with the study of all of these arts flourishing in medieval Europe. The Middle Ages and Renaissance also marked the publication of numerous texts on these subjects, with authors attempting to read new meanings into the world that they lived in. People certainly believed in numerology and used numerological principles to guide their lives until quite recently, and some people continue to do so.

A typical numerology reading will use the numbers associated with your name and birthday. For people with multiple names, things can get quite complex, as you might imagine. Numerologists may also take someone’s place of birth or nation of birth into account when coming up with a reading, and depending on the type of numerology that someone practices, the reading might reveal information about someone’s character, past, future, or all three.

Get your very own personal numerology report. You will learn what your life path is and what type of career is best for you. You will be absolutely amazed at the accuracy of this report. If you have ever wondered why the date of your birth is significant and why you are here then be prepared for all to be revealed. This report will be delivered to you direct via email within 24hrs. These reports are personalised with your name and also make ideal gifts.  Get your report here