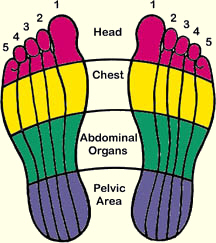 Zone therapy is the foundation of modern reflexology whereby reflexologists apply pressure to (or massage) specific areas of the feet or hands, stimulating the circulation and nerve impulses to promote health throughout ‘zones’ of the body.

The principle of energy zones, and the disease and rejuvenation of energy pathways, has been known for centuries. Harry Bond Bressler, investigated the possibility of treating organs in the body through pressure points, and he discovered that this form of reflexology seemed to have been practised as far back as the 14th century.

Using pressure on the toes, for instance, reflexologists can help with the pain associated with sinusitis, can drain the sinuses and strengthen them, in order to avoid future bouts of sinusitis.

This pressure, applied to any of the ten zones, creates a signal throughout the nervous system to the brain, which in turn stimulates the internal organs to regulate and improve the way they function.

As noted earlier in the course the American Dr William Fitzgerald is considered to be the founder of zone therapy and during his research into pain relief he established that pressure applied to one part of the body could have an anaesthetic effect on another part, away from the pressure site. 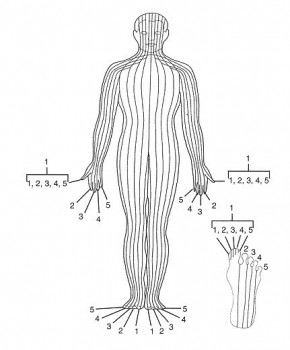 There are many ways to chart or map the feet and the whole body. Charting or dividing the body conceptually into sections helps us understand how each section works.

Once we chart all the sections, the whole makes more sense. On top of just mapping out the reflex points to corresponding organs on the soles of the feet and palms of the hands, there is another theory that reflexology encompasses: the belief that there are invisible pathways of energy that run vertically along the body.

These energy flows or lines are called zones. Imagine your body tattooed with pin stripes that run the length of your body from your toes on up to the top of your head. These pin stripes are your zones. Working with these lines, and with points along the lines, is known as zone therapy.

As you can see in the illustration, the body is divided into ten longitudinal zones, which provide a simple numbering sequence. Each toe falls into one zone, and there are five zones in each foot, with the big toe as zone one, through to the little toe, which is zone five; the fingers link up to the zones in the same way.
Zones are distributed up the body like slices, and when you work on the feet, you are automatically working through the whole of the human body. The principle is that, within these zones, energy runs up and down between all the parts of the body.

This energy connection should be free-flowing, in order that all the parts of the body – organs, muscles, nerves, glands and blood supply – work in harmony and at the optimum level for good health. If there is a block of the body’s natural energy, it will have an effect on any organ or part of the body that lies within that particular zone.

If a reflexologist finds sensitivity in one particular area of the feet or hands, this indicates that there is an imbalance in the entire length of that zone. For example, if someone is suffering from conjunctivitis in the right eye, zone therapy would suggest that this creates an energy imbalance in the right kidney and in any other bodily structure lying in that zone, causing it not to function as effectively as it should.

Each organ or part of the body is represented on the hands and feet. Massaging or pressing each area can stimulate the flow of energy, blood, nutrients and nerve impulses to the corresponding body zone, and thereby relieve any disorder in that zone. The reflexes on the feet and hands are effective because they are situated at the ends of the zones and are therefore more sensitive than other parts of the body.

It is important to understand the theory of zone therapy, because disease and illness tends to run along these lines. For example, diabetes is a disease primarily caused by malfunctioning of the pancreas.

The above is an extract from our professional Reflexology Diploma Course