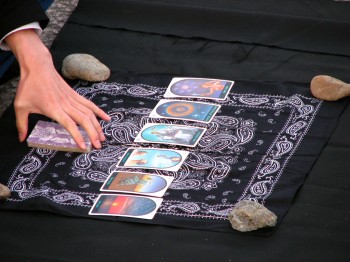 Tarot is a deck of cards now commonly used in ‘fortune telling’, or divination. Divination using cards is called cartomancy. The deck consists of four numbered suits like a regular deck of playing cards, and twenty two picture cards numbered one through twenty-two (in some decks, zero through twenty-one).
The cards appeared at roughly the same time as the now-universal 52-card deck, and it is a matter of dispute which came first. The Tarot deck has fourteen cards in each suit, versus thirteen for playing cards; the Tarot ‘court cards’ include a page along with the knight (knave), queen and king.

Learn to Read the Tarot

The twenty-two picture cards, now called the Major Arcana (the suited cards are the Minor Arcana), were originally permanent trump cards. That is, in a trick-taking game, any picture card would take a trick over a suit-card. They illustrate universal story themes; the Fool is a young man setting off on a journey with a pack insouciantly slung over his shoulder. He is often depicted not watching where he’s going, and about to walk off the edge of a cliff, while a small dog yaps at his heels in warning. Other cards depict concepts rather than people – the wheel of fortune is fate or karma, and the figure of Judgment is justice in all its forms.
The suits have direct analogies to standard playing cards: swords are spades, cups are hearts, pentacles (coins, discs) are diamonds and wands (staves) are clubs.
The use of the Tarot as a tool for telling fortunes is of fairly recent invention, dating back to the end of the eighteenth century. The most familiar deck is the so-called Rider-Waite deck. The designs were by Arthur Waite, a member of the occult society Order of the Golden Dawn, in collaboration with artist Pamela Colman Smith, so the deck is sometimes called the Waite-Smith deck. It was first published by the Rider Company in 1909.

Hundreds of different Tarot decks now exist. Decks that downplay or remove the Christian symbolism are increasingly popular, and some feminist decks significantly downplay the male dominant roles found in traditional decks. Some decks have discarded the suit system altogether and are structured around different themes – animals in a Native American inspired deck, for example.
Uses for Tarot cards are varied. They can of course be used in a traditional fortune telling layout. But they can also be used as inspiration cards, affirmation tools, or for self-discovery and intuition building.

Today we are concentrating on Tarot, if you wish to study this subject and become a professional Tarot Reader t please check out our courses.  In addition to Professional Tarot Reading, we can train you in Palm Reading, Aromatherapy and Angel Therapy, Reiki 1 and 2, Crystal Healing and Colour Therapy. You can take as little or as long as you like to study. Remember your diploma and exam are all in the price of the course, so there are no extra costs.

As soon as students enrol we guarantee that your course is with you within hours.  We are so confident with the quality of our courses that we offer a 7 day back guarantee if you are not happy –  a service that that our other competitors do not offer.
Many of our students have commented on how easy it is to study; our courses are comprehensive, easy to follow and fun.  Within a short length of time they have been able get back the price of the course, been able to work as many hours as they want and earn quite a lot of money in doing something that they love to do.
Our personal tutor service includes support before and after study – we can offer advice on how you get started. We include some personal marketing tips should you need them – again much more than our competitors can offer.  Our team has many years experience in holistic therapies, palmistry/tarot reading, training and marketing so we know that we can offer the best advice available.