The Mystery of the Human Aura – Part 1 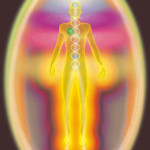 What is the Aura?

The spiritualist Ursula Roberts, whom was a spiritualist and clairvoyant incorporated her observations in a small booklet called “The Mystery of the Human Aura” – This book is no longer in print however having been drawn into an old dusty bookshop in a place called Todmorden in Yorkshire UK,  I found a copy of this publication.  Although this was written in the 1950’s or 60’s for a local spiritualist group the knowledge she imparts must not be lost. She wrote about things that only today we are discovering.  I am reproducing her work so that others may read about her observations and that her work will not be lost.  I think you will be fascinated at her in-depth knowledge of this subject. I will be breaking it down into a number of parts.

Symbolically, these radiations can be defined as the field of electricity which every individual manufactures from the materials at its disposal. As a dynamo utilizes the latent steam power, so the human machine can be said to utilize the electricity latent in other substances, converting them into the necessary energy needed for the exertions of daily life, hence the necessity for correct food, pure air and pure water. An insufficient supply of any one of these constituents will result in a measure of discomfort, and in course of time will bring about a state of illness. We may, therefore, conclude that the auric electricity is received by the human organism from natural sources and converted into the energy which drives the machine of the body.

Relationship between Food and Aura

The argument may be here advanced that the food used for human consumption differs in a vast degree from the mineral substances used in the production of electricity. Basically, the vegetable and the mineral kingdoms are identical. The analyst will prove that a given quantity of vegetable matter contains a percentage of mineral salts in varying quantities and of various kinds. In horticulture, it is customary to feed plants with inorganic chemical compounds, which, by a process of assimilation, change the basic colour of the flower, or produce variegation in the foliage. It is common knowledge that a hydrangea will produce richly colour flowers if fed with a solution containing led.

Spinach contains iron in such a form as to be easily assimilated by a body lacking in iron, and therefore lacking a substance needed for the manufacture of essential energy. A person lacking in the needful mineral matter becomes anemic, easily tired and indulges in lengthy periods of sleep, during which time the minimum amount of electricity is needed for the functions of the human machine. An excess of organic substances will create what may be termed short circuits, or explosive tendencies in the individual such as hysteria, apoplexy, and short temper. 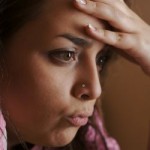 We are accustomed to relegate periods of depression, headache and indigestion to digestive causes. We do not think sufficiently deeply to discover how and why certain foods affect the flow of energy. It has been scientifically proved that the human machine can be maintained in a state of perfect health by a simple diet of uncooked vegetables, fruits, cereals, nuts and barks.  All of these, upon analysis, reveal balanced quantities of easily digested mineral matter, whereas cooked and manufactured foods contain less quantities of these important substances. Dietetic research has proved that a low state of energy results from such diets.

We are, therefore, forced to the conclusion that it is not merely the amount of food which gives us energy, but the quality of the food and the time allowed for its assimilation, not merely into the blood-stream, but also into the electrical force from which maintained our life, we could safely consider that life could be prolonged indefinitely. When death occurs something in the human machine fails to assimilate the materials placed at its disposal, and therefore, the energy needed for normal functions becomes non-existent. A doctor can certify the cause of death as one of many diseases affecting given organs of the body, but he cannot certify with any degree of accuracy when and how the body first became prone to the disease, and why disease should appear in one person and not in another.

In part 2 we will continue the discussion of how disease shows itself in the aura before making itself felt in the body.

Download your free copy of “How to See Auras” and get Free Aura Lessons. 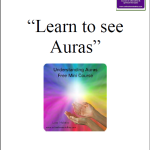