Therapist works with chakras and angels for healing 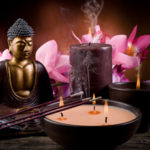 Goals for treatment: Identify and clear blocked energy in chakras and aura

As a holistic therapist, I conducted a pre-session interview, also using the sample treatment card. Client holds a great deal of tension and stress internally, keeping his emotions inside. He has pain and mobility issue in his knees and shoulders from prior injuries. He maintains a poor diet, eating sweets and high calorie, low nutrition foods. He is sensitive to smell and prefers not to incorporate essential oils during the session. There are no health contraindications to Client’ participation in the session. The intention for this session is to scan the chakras to reveal blockages, do a cleansing and open all seven chakras in the body, fan out to his aura and do a comprehensive cleaning and healing of all seven layers of his aura. Prior to meeting with Client, I performed a chakra meditation with myself and then asked for the archangels to surround me as I worked on Client.

The client was interviewed prior to the start of the session, reviewing the treatment card and his issues and goals for the session. Wearing comfortable clothing, Client was asked to turn of his cell phone, remove his shoes and lie down on his back on a couch. A bolster pillow was placed under his knees for comfort as well as a pillow under his head and neck. A light blanket was placed over Client, covering his entire body, up to the base of his neck. He was asked if he was comfortable and if the room temperature was satisfactory, to ensure he was nether cold nor hot. The room was dimly lit and quiet, void of any noise.

I began by asking Client to close his eyes and take a deep breath in through his nose and exhaling forcefully through his mouth. I encouraged him to continue to breath in this manner until he reached a state of relaxation. Then, I asked him to lighten his breathing to a normal level. I told him that I would explain the process through each step, helping him to visualize both his chakras and aura layers and the moving of energy throughout the session. I stated out load that this session was dedicated to Client and his highest good. Then, I asked out loud that 100,000 angels and the seven archangel surround him as we began the healing. During my prior meditation with myself, I was able to anticipate where he had certain blockages in his chakras. So, I began with talking to him through each chakra, staring with the root chakra. I asked that he visualize his root chakra, the tail bone, as a bright red ruby; then upwards to the sacral, sacrum bone, chakra as sparkling orange gem; then, up to the solar plexus, above his belly button and below his ribs, as a bright, warm yellow sun; the, up to his heart chakra, as an emerald green, multifaceted gem, gleaming green light; then, up to his throat chakra, a blue sapphire, emanating blue light; then, up to his third eye chakra in the middle of his forehead, above his eyes, as an amethyst, glowing with purple light; then, up to his crown chakra, at the top of his head, bursting with indigo and white light, up to the heavens.

I requested that his crown chakra be open and the angels surround his crown chakra and for the Holy Spirit to send golden white light through his crown chakra all the way through his body, all the way down through his feet and into the center of the earth. I did this to ground him as well as to bring in a higher energy vibration for healing. Because he seemed to be blocked at his root, solar plexus and throat chakras, I asked that the archangels send a cord of golden light from the top of his head, straight through each of his seven chakras and that this Holy cord align itself with his DNA in every cell of his body. Then, I called upon Archangel Michael, to place his sword through the top of Client’ head, and prayed for all negative energy, down to the cellular level to be expelled through the crown chakra, for the angels to seize and alter into positive energy for the universe. I asked Client’ permission to allow Archangel Michael to do this. Then, I asked that Archangel Michael’s sword cut all unnecessary cords and attachments in Client’ life, from the past present and future that were not there to serve him or others for good, or did not belong to him for his highest good. Finally, I asked that all positive energy, which Client had lost of given away, be returned now to nourish his mind, body and soul and make him complete again.

At this point in the session, I told Client that the angels and Archangels would continue to reside with him as we began to clean and remove any misplaced or negative residual energy and impurities in the seven layers within his aura. I reminded him to continue breathing in through his nose and to exhale through his mouth—breathing in positive energy and exhaling negative energy. My intention was to focus on where I had identified blocked energy on his chakras, but to also cleanse his entire aura. I began by observing Client’ aura and it’s different layers. I said a silent prayer that I would be protected from any negative energy being removed from Client and that it be given to the angels. I began with my right hand, close to the body in the area of the root chakra, with my fingers spread apart. I waved the energy upwards for ten motions. Then, I shook off any residual energy that had attached to my hand and fingers. I continued to perform the cleaning, close to the body, at each chakra point in the same manner, ten times, moving the energy upward and shaking the residual energy off me after each area (chakra). Then, I repeated the entire aura clearing practice, at each of the seven layers of his aura, going further from the body each time. Some areas did not require as many motions as others. For his root, solar plexus and throat chakras, I focused on funneling and smoothing as well. At this point, I announced to Client that his aura was cleansed and healed. I asked out loud that his internal and external energy be blessed and protected.

Use of Crystals for vibrational healing 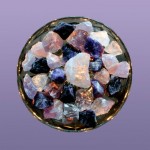 Then, I explained to Client, that I was going to lay crystal stones on each of his chakra areas. The stones I use have been blessed by my Archangel and were washed in salt water and put in the sun and moonlight. I talked to Client as I placed the appropriate color stone on each chakra area in this order: Red=Root; Orange=Sacral; Yellow=Solar Plexus; Green=Heart; Blue=Throat; Purple=Third Eye; White=Crown. Then, I told Client that he would bathe in this crystal energy for twenty minutes alone in the room, with the angels and Holy Spirit present, for which each vibration of levels would contribute to infusing positive energy and aligning his energies properly with the cosmos. I asked that he envision his aura, and that it not only surrounded his entire body, above and below, behind and in front; but to picture it growing and encompassing the room. At this point, I told him to breathe and keep his eyes closed. I turned on relaxing music at a low volume—Tibetan singing bowls, which also offer excellent vibrations for the session.

As I waited in the next room, I did a personal energy cleansing and asked Archangel Michael to cut any cords or attachments that may have formed with me during the session. I said a prayer and asked for a blessing as well. Then, I took some notes about the session. Once his twenty minutes was complete, I returned to the room. I quietly announced that I would remove each stone in the same order I had placed them. As I did so, I explained that all energy was flowing upwards. Once complete, I asked him to open his eyes slowly. I then, out loud, thanked all of the angels and the Holy spirit for their Divine assistance during the session. Client also said thank you out loud.

The Client was told that I was going to remove the blanket and then told him to take his time sitting up and not to stand up just yet. Client sat up on the couch and I asked him how he was feeling. He was smiling and said he felt relaxed, but energized. I then did a post-session interview, not asking too many questions, but listening to feedback and his feelings about his experience, taking small notes. I did share with him where I felt he was blocked and suggested some visualization and meditative practices for him to use daily for 5-10 minutes, in order to maintain good energy throughout his body and aura. Finally, I told him that as his personal therapist he could contact me anytime with questions or concerns and asked him to return for a follow-up session within a month. I also suggested that during his next session, we combine an Archangel reading, to identify his archangel to assist him with his energies and daily life. Client was offered a glass of water before leaving.

Learn more about chakras and auras and using energy healing  and choose from a wide range of holistic and alternative therapy courses.