Why have a hopi ear candling treatment

Having a Hopi Ear Candle Treatment

Hopi ear candles are widely recognise as the most effective method of removing excess wax from the ear and rebalancing internal pressure. By doing so, a large number of conditions associated with the Ear, Nose and Throat can be treated. 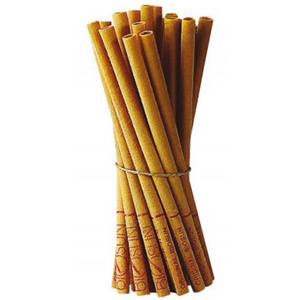 Nasal and throat allergies
Technically known as allergic rhinitis, this condition is the inflammation of the membrane that lines the nose and throat. The inflammation occurs following an allergic reaction, after inhaling specific allergens such as dust or pollen. When allergic rhinitis occurs during the spring or summer it is commonly known as hay fever. Symptoms include sneezing, runny or blocked nose, irritated eyes and nose. The use of Hopi ear candles on a monthly basis may help to reduce the incidence of these allergic reactions and more frequent use of the candles, 1-2 times a week, during more intense attacks may help to reduce their severity.

•    Relief of a build up in pressure (often after flying or diving)
Many people experience the feeling of a change in pressure in their ears when flying. This happens when the eardrums bulge towards the area of lower pressure. During normal function, the pressure inside and outside the eardrum should remain equal, the Eustachian tubes help to regulate this pressure. However, when flying, the eardrum can be pushed inwards as the pressure builds near to the ground. For most people this change in pressure is easily and naturally corrected, often through the action of chewing, swallowing or yawning, but when these actions fail to right the pressure imbalances the use of Hopi ear candles may be required.

The warmth of the candles appears to help the Eustachian Tube to function correctly, this in addition to the slight suction that is applied with the candle, can help the eardrum to correct itself. Ear candling can be very beneficial for correcting ear pressure for people who have recently flown, treatment in the days after the pressure imbalance is recommended.

•    Sinusitus
The sinuses are the air filled cavities around the eyes and nose. Sinusitis is described as the swelling and inflammation of the lining of the sinuses. The condition is brought about when swelling causes the openings in the sinuses to become blocked and prevents mucus from draining effectively through the nose. As the mucus builds up, this leads to an increase in pressure and often to pain. Sinusitis is a relatively common issue and feels like a standard head cold, often with headaches, though cases can be both short term and long term. Hopi ear candles can be used on a daily basis in the first few days of sinusitis, and if symptoms persist can be used on a weekly / monthly basis in the long term.

•    Glue ear / blocked ear
The term ‘glue ear’ refers to the repeated collection of fluid in the middle ear, very common in young children. In this condition the middle ear can become filled with think, sticky, glue-like fluid and can lead to a degree of loss of hearing. When the Eustachian tube becomes blocked, often due to infection, the middle ear can fill with fluid, leading to the development of symptoms such as partial deafness and ear infection. The development of glue ear usually occurs over several months and can often go unnoticed initially. However, once diagnosed, Hopi ear candles can help to alleviate the symptoms and speed up recovery.

•    Colds
The common cold is one of the most widespread conditions throughout the modern world, with around 50% of the population of Europe and North America estimated to be affected each year. With symptoms consisting of a runny nose, sneezing, sore throat and coughing, a cold can be a great inconvenience to everyday life and often results in lost work days. Hopi ear candling, done once or twice a day, can help to clear the congestion and blockages that arise from colds and therefore to ease the symptoms.

•    Headaches & Migraines
For most people the occasional headache is nothing to worry about, but for those people that suffer from regular headaches or migraines it can be very debilitating. Hopi ear candling can help to relax the client and also to clear the sinuses and airways, helping to relieve the discomfort of headaches and migraines.

•    Tinnitus
Tinnitus is the term used to describe the condition of sounds and ringing being heard in either one or both ears. These sounds are actually formed within the ear itself and are frequently described as ringing, buzzing or whistling. Whilst the causes behind tinnitus are still unclear, any sufferers point to ear candling as being beneficial in terms of promoting relaxation.