The Psychological Benefits Of Exercise

Healthy In Mind And Body – The Psychological Benefits Of Exercise

Regular exercise is great for building healthy bodies. Cardio-based exercise combats obesity, strengthens the heart and muscles and helps prevent many of the debilitating effects of aging such as the loss of bone density. However, regular exercise can also have a tremendously beneficial effect on how we feel about ourselves and the way we face challenges in an ever more stressful world.

The connection between mind and body health are now generally accepted by most researchers, however, there are still some questions, such as just how much exercise we need, when we should exercise and the types of exercise that we should be doing to enhance our psychological health. One thing does appear to be beyond doubt. The key is regular exercise and if that exercise can take place outdoors in calming and uplifting surroundings then it is even more effective at combating depression and anxiety.

The great news is that a good mood does not depend on a vigorous workout. Even modest amounts of exercise can make an enormous difference in combating stress, depression and anxiety because exercise just makes us feel better.

All too often, people tend to go straight for the medication option when it comes to mild to moderate depression. However, this approach may not be optimal. Modern anti-depressants can cause both physical and psychological addiction. Once you are taking these drugs, it can be a real challenge to stop and often it is the start of a long road paved with ever stronger dosages and medications.

Depression is not the only psychological challenge that can be addressed by regular exercise. Anxiety and exercise have also come under the spotlight. Some researchers believe that anxiety is the result of our nervous systems going into what is called ‘fight or flight’ mode, something that is hardwired into human beings. When faced with a threatening situation we begin to experience symptoms such as dizziness, sweating and an elevated heart rate which are all symptoms of anxiety.

However, these are all also results of moderate exercise. Researcher and published author, Dr. Jasper Smits, Co-Director of the Anxiety Research and Treatment Program at Southern Methodist University in Dallas believes that regular exercise can act to desensitize those suffering from anxiety.

The theory is that repeated exposure to these symptoms will lessen their effects. Smits theorized that those who suffer from anxiety may very well begin to associate the physiological ‘fight or flight’ reactions with the positive experience of exercise, rather than a negative one. It also helps that exercise promotes the release of endorphins which are the body’s feel good hormones, further strengthening the association of symptoms such as elevated heart rate and sweating with a positive reward.

After a study involving volunteers who suffered from anxiety which consisted of a control group and a group that engaged in regular exercise, the results were fairly conclusive. The volunteers who engaged in regular exercise for a two week period demonstrated far less anxiety sensitivity than the non-exercising control group (Depression and Anxiety, 2008).

It has become clear that in cases of depression and anxiety, exercise can only be beneficial. However, it’s worth noting that studies are still underway about how exercise works in conjunction with other forms of treatment. It might very well be that a combination of counseling and exercise would be more effective than exercise alone. It simply may depend on the individual concerned. 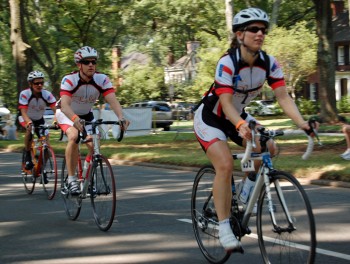 Get out and go for a walk, or jog or get on your bike. Exercise is undoubtedly good for both body and mind.

Shana Smith is a natural health enthusiast and successful business owner. She owns a site,  www.aromatherapy4mom.com which is dedicated to a healthy lifestyle.

Why not learn more about Health and Nutrition