An Introduction to Tarot

Have you ever wondered what tarot is and where it came from?  Well, here’s a brief introduction from the lady who wrote the very first Tarot diploma course.

A bit about the history of Tarot 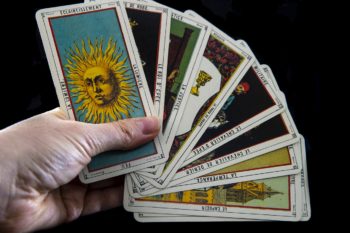 For hundreds of years, researchers have tried to pinpoint the true origin of the tarot.  We are still unsure who created the first deck, but it’s suggested, that it originated in Northern Italy in the 15th Century.  It is written that tarot was regularly used to play a card game similar to Bridge. The game was popular throughout much of Europe for centuries and is still played today, particularly in France. If you have ever been to Spain and picked up a pack of playing cards, you will find a similar resemblance to tarot cards.

The cards are primarily meant to be used for enlightenment. To aid the reader or questioner (the person asking for advice from the tarot) to raise their unconscious and bring into play the most important aspects they need to be aware of at the time of the reading.

The current historical understanding is that playing cards came to Europe from Islam, probably via Muslim Spain, about 50 years before the development of tarot. They appeared quite suddenly in many different European cities between 1375 and 1378. European playing cards were an adaptation of the Islamic cards. These early cards had suits of cups, swords, coins, and polo sticks (seen by Europeans as staves), and courts consisting of a king and two male underlings. The tarot adds the Fool, the trumps, and a set of queens to this system.

Some time before 1480, the French introduced cards with the now-familiar suits of hearts, clubs, spades, and diamonds.

As well as the tarot, Italian and Spanish playing cards still preserve the earlier suits.

The Joker originated in the United States around 1857, used as a wild card in poker and as the highest trump in Euchre. It appears to have no direct relationship to the Fool of the tarot.

Why use the Tarot?

A reading can help to clarify past events; to understand why they took place and possibly give some insight into how to avoid making the same mistakes again.  Or how to make the good events happen again.  The cards can also predict possible future events.  Sometimes, just knowing ahead of time an event may occur, is enough to change a person’s path and future outcome.

It is human natures that causes us to fear the unknown or the unexplained, but tarot cards were not meant to be feared or evil.

Today, tarot readers have made themselves available almost everywhere in the USA as well as other countries.  They are helping millions of people everyday to cope with life’s uncertainties.  Who are we to discount something that benefits so many people, so often?

Practical advice for the beginner

It’s important to choose a full pack of tarot cards, containing 78 cards, including those known as the Major and Minor Arcana.  Buy a set with fully illustrated pictures to give you a clear indication of the card’s meanings. A card, which shows merely 6 or 7 coins, for instance is difficult for a beginner to understand, whereas cards with pictures, which tell a story, are a lot easier to follow. The pack I personally use is Morgan Greer  because it has excellent vivid pictures throughout the deck.

Unlike ordinary playing cards, each suit has four court cards rather than three. Kings, Queens, Knights and Pages make up the 56 cards of the Minor Arcana. In addition to these cards are the remaining 22, known as the Major Arcana, which have their own numbers. There is one exception, which is the Fool which carries a 0.  Arcana is a Latin word whose meaning is ‘secret’

I hope you’ve enjoyed this introduction to tarot. What I’ve shared is just a small excerpt from my personally written professional tarot reading diploma course.  This course will not only teach you how to read the cards, but also to gain an accredited diploma in tarot reading.  You can then use this to apply for a tarot reading job.

There is now more opportunity than ever to start a new career in tarot reading, however if you prefer just to have your cards read then visit this link and you will find a list of IPHM approved professional tarot readers reveal your future, prepare to be amazed…..